The Etymology of Execution

The Etymology of Execution

According to Samuel Johnson, distinguished writer and creator of the first English dictionary:

“When a man knows he is to be hanged in the morning, it concentrates the mind.”

With that grim thought to start us off, today I’ll be looking at a tangent of the dark business of execution. Not at the technicalities or at any particular case, but at the etymology of execution, the innocent-sounding words and phrases that we use every day while totally unaware of their dark history. Like it or not (personally, I don’t) the death penalty is still a part of human existence in many countries. Like any other human activity we’ve developed words and phrases to describe it and, despite some of those being decades or even centuries old, they’re still part of everyday conversation.

So, today we’re going to look at some of these innocent-sounding phrases that so many of us use every day without the slightest idea of their actual meaning. Let’s start with one we all know, namely ‘In the hot seat.’ If somebody is complaining about occupying this particularly uncomfortable piece of furniture it’s no great surprise. The ‘hot seat’ is actually American underworld slang for the electric chair.

‘One for the road’ is another everyday phrase referring to having one last drink before going on your way. During the dark days of public executions at Tyburn (where London’s Marble Arch now stands) you’d certainly be going on your way. Permanently. It wasn’t unusual for a condemned convict to stop between Newgate Prison and Tyburn to be allowed one final pint of beer or glass of grog. Having taken the last dink they’d ever have they continued their final journey having been put back ‘On the wagon.’ When we say that somebody has ‘gone West’ we usually mean they’ve departed in one way or another. Tyburn is West of what was Newgate Prison (now part of the Old Bailey) so yes, plenty of people have ‘gone West.’ Literally. Before their final journey they were ‘In Limbo’ (sound familiar? As though you’re between one situation and another?). ‘Limbo’ being a name for the condemned cells at Newgate where, awaiting appeal, convicts languished halfway between life and death.

Have you ever felt like you’ve been ‘Thrown to the wolves’ or ‘Dropped in the cart’, meaning that you’ve been put into a highly unpleasant situation you wanted no part of? The cart in question was the cart used by hangmen to transport the condemned between Newgate and Tyburn or the legendary tumbrels that brought victims of the French Revolution to their appointment with the guillotine. Being ‘Thrown to the wolves’ would have been far worse for you if you’d been a Viking as this was one of their standard forms of execution. Simply fill a pit with half-starved wolves, add somebody you’ve taken a dislike to and it’s all aboard the chew-chew train.

Has anything ever put you off something? Made you feel ‘turned off’? Again, it’s much less unpleasant now than a few centuries ago when, in the absence of purpose-built gallows, hangmen positioned their customers atop a ladder with a noose round their necks and then twisted the ladder until they fell off and slowly strangled.

Has anybody ever ‘pulled your leg’? Behaved in a way that seemed rough or cruel until you realised there was no malice behind it and they were just kidding around? Well, in the days before hangmen turned their craft into a science with precisely-calculated drops designed to bring instant death, a prisoner on the gallows might strangle for a half-hour or more before dying unless the hangman went under the trapdoors and literally pulled their legs to hasten their end. So, when somebody says ‘I’m only pulling your leg’ be glad its original meaning doesn’t still apply.

It happens to us all. We’re looking for something or someone and we’ve ‘Drawn a blank,’ usually to our disappointment. If you were taking part in a firing squad you’d quite likely be delighted to ‘Draw a blank.’ It’s customary (though entirely pointless) for at least one rifle in a firing squad to be loaded with a blank so no shooter ever really knows whether or not they actually killed a prisoner. So, having ‘Drawn a blank’ isn’t necessarily as disappointing as it sounds. Although an experienced rifleman would instantly know the difference between a blank and live round by the kick as the rifle fired. 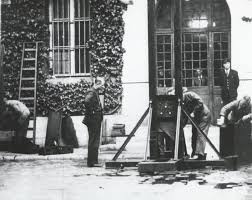 The executioner and his valets packing up after an execution.

If you’re a wealthy individual then maybe you have some kind of servant, butler or personal assistant. Maybe you even have a ‘Valet.’ Prior to their own abolition, the French had a fair few ‘Valets’ as well. It was the term for an assistant executioner who helped set up a guillotine, test it, restrain a prisoner and then step hastily to one side to lessen their laundry bills. In its original context, if you employed a ‘Valet’ then it was because you travelled round France decapitating people for a living.

Ever been in a deeply unpleasant situation which looks like it’s only going to worsen, only for a temporary improvement at the last moment? You’ve had a ‘Stay of execution.’ A ‘Stay of execution’ is rather more important to some folk than others. It’s especially important if you’re on Death Row as it’s a written document postponing your date with death indefinitely. Unless, of course, a judge’s secretary dials a wrong number and, having redialled the right one, finds they got through just a minute or so too late. Which has happened on more than one occasion.

The death penalty doesn’t just endure in language, ironically outliving so many executioners and all their ‘customers.’ It’s even permeated into superstition. Walking under a ladder is still seen by some as unlucky. Considering that ladders were once makeshift gallows and the only people under them were doing the hangman’s hornpipe, it was certainly unlucky for some.

Speaking of that particular superstition, do you know exactly why the number 13 is unlucky for some? It’s because there are traditionally 13 steps to the top of a headsman’s scaffold or a hangman’s gallows. The traditional ‘hangman’s knot’ (very rarely used by actual hangmen, ironically) also has 13 turns of the rope. A standard British hangman’s rope, even until abolition in the 20th century, was still 13 feet long.

It’s one of the darker areas of etymology, but the vernacular of crime and punishment is a rich and varied area. And like I said, whether you like it or not (and personally, I don’t) the death penalty was once a part of British life (and death) and it still is in many other countries.

Well, I’ve got other things to do now so I’d better not hang around. If you’re curious to find out more about this fatally fascinating area of human discourse then waste no time commenting or in dropping me a line.

M25 Rapist Dies While Being Considered for Parole

Read More
M25 Rapist Dies While Being Considered for Parole

The Exoneration of Robert Jones